A few months ago, Bravissimo released their Summer collection. There weren’t many pieces in my size range, but one in particular caught my eye: the Cherry Fling. Featuring gingham bows and cute cherries, it’s a stunning retro-inspired bra that I knew I had to try! As a current 30K/KK, I first tried this bra in a 30K (pictures/review here), which was too small in the cups for me. I also found the 30K to run tight in the band, so it fit more like a 28KK. With this in mind, I reordered in a 32K.

I think you can see in the pictures, but this is a much better fit! As I hoped, the band was nice and firm, so it fit like a more true-to-size 30KK. Others have also said they found it regular in the band, so it seems this bra may have a lot of variation between sizes. I found the bra to give the usual upfront, naturally uplifted/rounded shape that I’ve come to expect from Bravissimo. There is some slight wrinkling at the bottom of the cup, but this does disappear with further adjusting. The cup is made of a denim print laminate material, similar to the kind used for the Dotty Spot, which I find to be a very sturdy, supportive choice. As with many other Bravissimo bras, there is extra lining in the upper section for HH-K cups, but as it’s a sheer white material I didn’t think it detracted from the look of the bra.

I found the wires fairly standard for Bravissimo: a somewhat high but narrow gore, with mid-width wires. I have a relatively narrow root, so the wires are about 2-3cm too wide for me – not wide enough to be uncomfortable, but it does cause some wrinkling at the side. A lot of bras in my size range have cups that come up too high under the arm, but I found this bra to be better than many others. It still isn’t particularly low, but the underwires don’t dig in and the sides of the cups don’t irritate my shoulders, so it’s a win in my book! The bra sports the usual fully adjustable straps and three hooks and eyes, which are two things I always look for in a bra. I’ve got to say, I’m very pleased with this bra! It’s hugely comfortable, the appearance is just perfect, and most of all, I’m so happy to finally have a bra I don’t quadboob in! All in all, I would definitely recommend this bra, especially for any fans of 50s-inspired fashion.

The Cherry Fling is currently available for £29 at Bravissimo, with a size range of 28 E-J, 30-38 DD-K. For another review (and a fabulous cherry-chocolate ice cream recipe ;)), check out this post on Sweet Nothings. 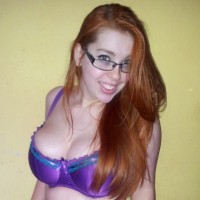